1. Professor of University of Tehran

One of the most important functions of every punishment is it's deterrent function and every expected punishment, prison included, is determined by two factors: Severity and certainty. This article analyzes the effect of these two factors on the deterrent effect of imprisonment. This analysis is done in three stages: first, when potential offender is deciding about committing crime. Second, when convict is serving his/her prison term and third, after the prison term, while he/she is evaluating his/her served prison term.
Theoretically, this article is based on rational approach to criminality. This approach supposes that an offender is not different from non criminals. He/she has the same preferences as others.

Imprisonment, Rationality of Crime, Deterrence, Severity and Certainty of Punishment.

Assistant professor of University of Tehran

Ifsad fi al-arth is one of the controversial issues in Islamic criminal law. Jurisprudential sources (fiqh) are not adequate to establish this concept; on the other hand widespread use of this subject matter in Iranian criminal law has shed the shadow of prudence on this dubious jurisprudential establishment.  s this definition of Ifsad has been accepted widely by recently enacted criminal law, it is of importance to analyze this approach. In this article it will be ascertained that this criminal conception does not have convincing grounds in Fiqh and most of Islamic scholars (Foqaha) have not recognised it as an independent crime. Furthermore it will be clarified that this approach results in massive use of this questionable subject matter and leads to arbitrary interpretations. Further it might causes potential risks for Islamic community and its citizens

Economic crimes challenge, not only economic system, but all parts of social system so it must be controlled by a comprehensive criminal policy. In other hand, Iranian economic enviroment has several deficiencies that make suitable context to economic crime while Iranian criminal law, hasn’t any special contrivance against it. For first time in Iranian legal system, new Islamic criminal code of Iran, presented a concept from “economic crimes” by specification of its limitative examples. But because of ambiguity and incompetence in this examples and lack of any criterion for distinction of economic crimes from other types of crimes, this concept was critically. This article offers a new structural difinition for “economic crime” then by using it, analyse and criticize the concept of “economic crime” in new Islamic criminal code of Iran.

Jurisdiction of Iranian Courts over the Piracy

1. Associate professor of University of Tehran

2. Assistant professor of University of Malayer

In the absence of an international court with jurisdiction over the perpetrators of piracy, these are the domestic courts that establish their jurisdiction over it. In recent years, many countries have enacted laws or revised their laws for the trial of pirates. Concerning Iran, the criminal courts are competent to try these offenders on the basis of territorial, universal and personal (active or passive) principles in certain cases. But, in other cases, this jurisdiction is not applicable to piracy. This paper shows that, like some other legislation, the Iranian laws must be revised in order to be applicable to all kind of pirecies perpetrated in our era.

The New Technic in Identifying of Serial Offenders

2. Associate professor of University of Theran (College of farabi)

3. Assistant professor of University of Shahed

4. Assistant professor of University of Tehran

Identifying serial crimes offenders has always been one of the main concerns of law enforcement officers. Since, on one hand, features of serial crimes like committing crime individually, the offender’s mental-behavioral disorders and the absence of a prior relation between the offender and the victim make the identification of the criminals of these crimes difficult, compared to other crimes and on the other hand, these kinds of crimes quickly make headlines and impose burdensome threats including feelings of insecurity and the fear of victimization to the society. Relatively new technique of criminal profiling with collaboration of criminologists, psychologists and law enforcement officers is sought to portray the possible features of dangerous criminals through observing the scene of crime and interviewing with the victims directly, which can be helpful in detecting the potential criminals. It is evident that this technique is not capable of accurate identification of the criminals; however, it makes the circle of possible suspects so tight that law enforcement officers can easily detect real criminals

Criminal cases are mainly of two aspects; general aspect which is employed so as to maintain order and security and restore the rights of society, and the private aspect which is practiced for the victim's lawsuit for the damages resulting from the crime. Proceeding is practiced by the criminal court in terms of general aspect and the judges on the behalf of the people have got this duty. However, the victim was given some options in the criminal courts to be able to launch public trial as well as private dispute based on the conditions. This is known as the principle of the competition of pursuit in the French legal system. In this paper, we deal with the conditions of practicing this principle in the French legal system to see whether it is possible to employ this in Iran's or not? On the other hand, what consequences might it bring in the criminal offices along with practicing the other principles? The results show that employing the principle of the competition of pursuit in the Iranian criminal procedure is not possible. Practicing this principle also could create conflicts with the other principles in the criminal procedures based on some conditions.

Legal Aspects of Suppression of Hijacking

in the Light of 11th September Legal Developments

One of the challenges facing the aviation is the problem of unlawful seizure of aircraft or what the most people say “hijacking” and how to deal with it. In a broader framework, a focused action to deal with the hijacking began at the end of the 60s. It was partly considered in the first aviation security treaty known as Tokyo Convention of 1963. However, due to the importance of suppression of hijacking, it was separately focused in an independent document called Convention for the Suppression of Unlawful Seizure of Aircraft known as the Hague Convention 1970. This convention has concentrated on the hijacking in international civil aviation. The author believes that the Hague Convention has achieved its primary goal and somehow as one of the most widely accepted treaties for the suppression of terrorism was successful. However, developments after September eleven which posed new challenges inter alia for aviation, led to a conference in Beijing in 2010 and two new international documents were adopted. One of these documents is the Beijing protocol 2010 which supplements the Hague Convention 1970 and in many ways has strengthened the Convention. Current research is focused on the most important aspects of the updated international rules governing the phenomenon of hijackings in the light of the documents concerned.

1. Assistant professor of University of Tehran

Regarding the previous attitude of Iranian criminal law toward the mens rea of resultant crimes, one can be convicted only if he do the crime with free will and intend to achieve the result. However, according to the new approach of Iranian criminal law, if one does not intend the consequence but do the act with knowledge of producing the result, the crime will be considered as an intentional offence. This called “indirect or oblique intention” and has long history in the Fiqh and common law. Section 144 of the new Iranian Criminal Act 2013, explicitly provides that all resultant crimes can be committed by this intention. However, this is not obvious that what the criterion of indirect intention in Iran is. Therefore, regarding the importance of finding a standard for oblique intention, this paper, focusing on the English criminal law, will scrutinize the three tests that were mentioned by the English law i.e. “high probability”, “natural consequence” and “virtual certainty” and compare it with the fiqh and Iranian criminal law and finally, provide a domestic mixed standard that can be applied by Iranian criminal law. 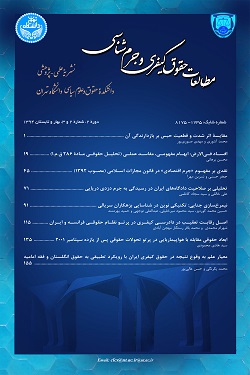